Here are a few examples of bespoke production from my past projects, you can contact me to see the full portfolio. Click on the links below to see recent major projects or scroll this page further down to see some earlier stuff I did.

This was a project to create bespoke training materials for a major care home provider based in Oxford.

They had rolled out a recruitment system called Application Tracking System (ATS) previously but wanted more dynamic training materials. They also needed a TNA to find out which care home staff were struggling and then for me to deliver training to the most in need.

After carrying out the TNA, I built them a series of QRGs, some PowerPoint Simulators for training and a series of Captivate demos that staff could use via their SharePoint intranet. 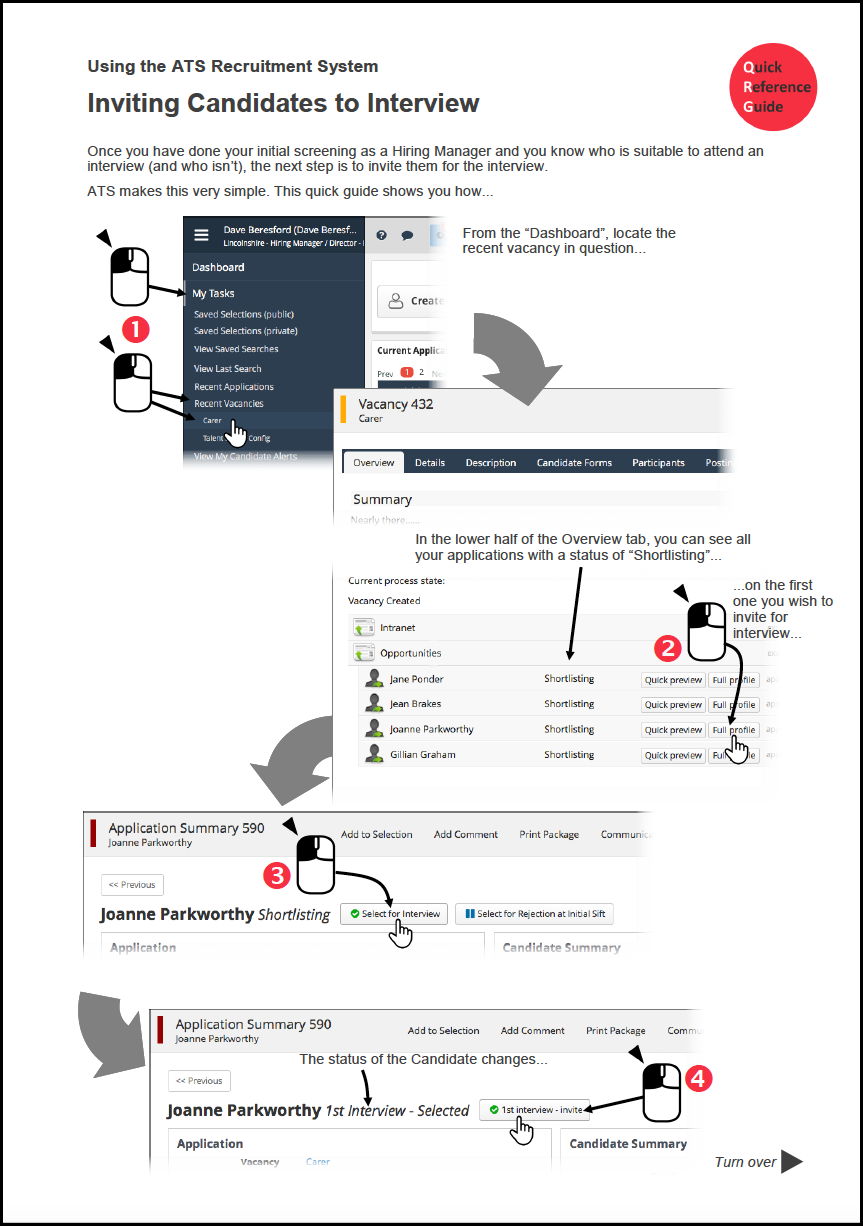 An example of one of the QRGs for OSJCT. I adapted my format to fit in with their existing marketing style. This was one of 20 QRGs I produced as part of this project

The PowerPoint Simulators were used during the training for several reasons: 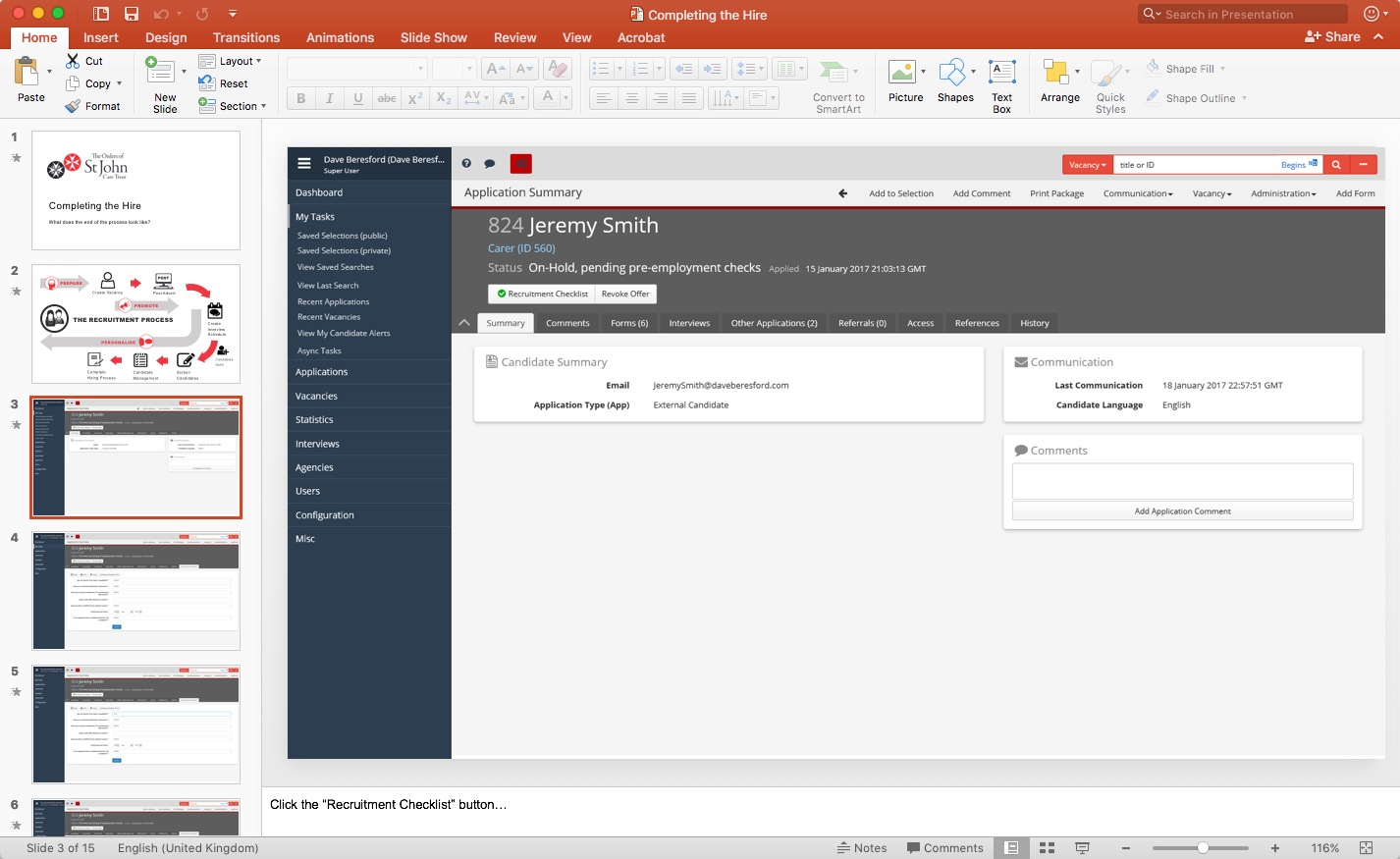 This was a project to give highly mobile lawyers easy access to cloud-based services – away from the existing “on-prem” solutions.

It was essentially a research and sales project. I needed to design materials that would convince and inform. I used my PowerPoint simulator approach, since the system was not fully built and we embarked on a campaign of company-wide idea selling and a high-profile ideas workshop run at Microsoft HQ in London.

IT Breakaway Design Snippets (from the Simulator) 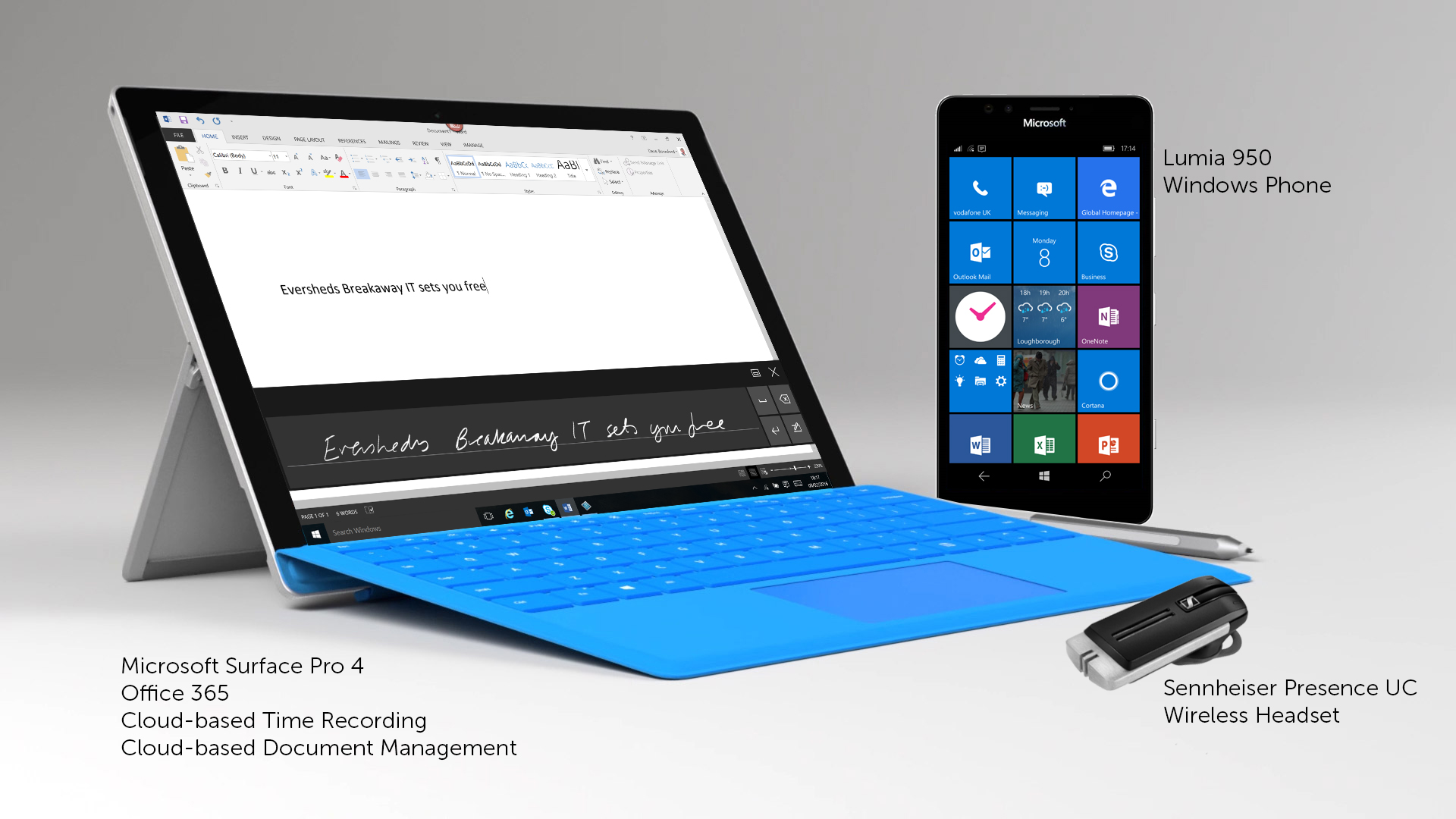 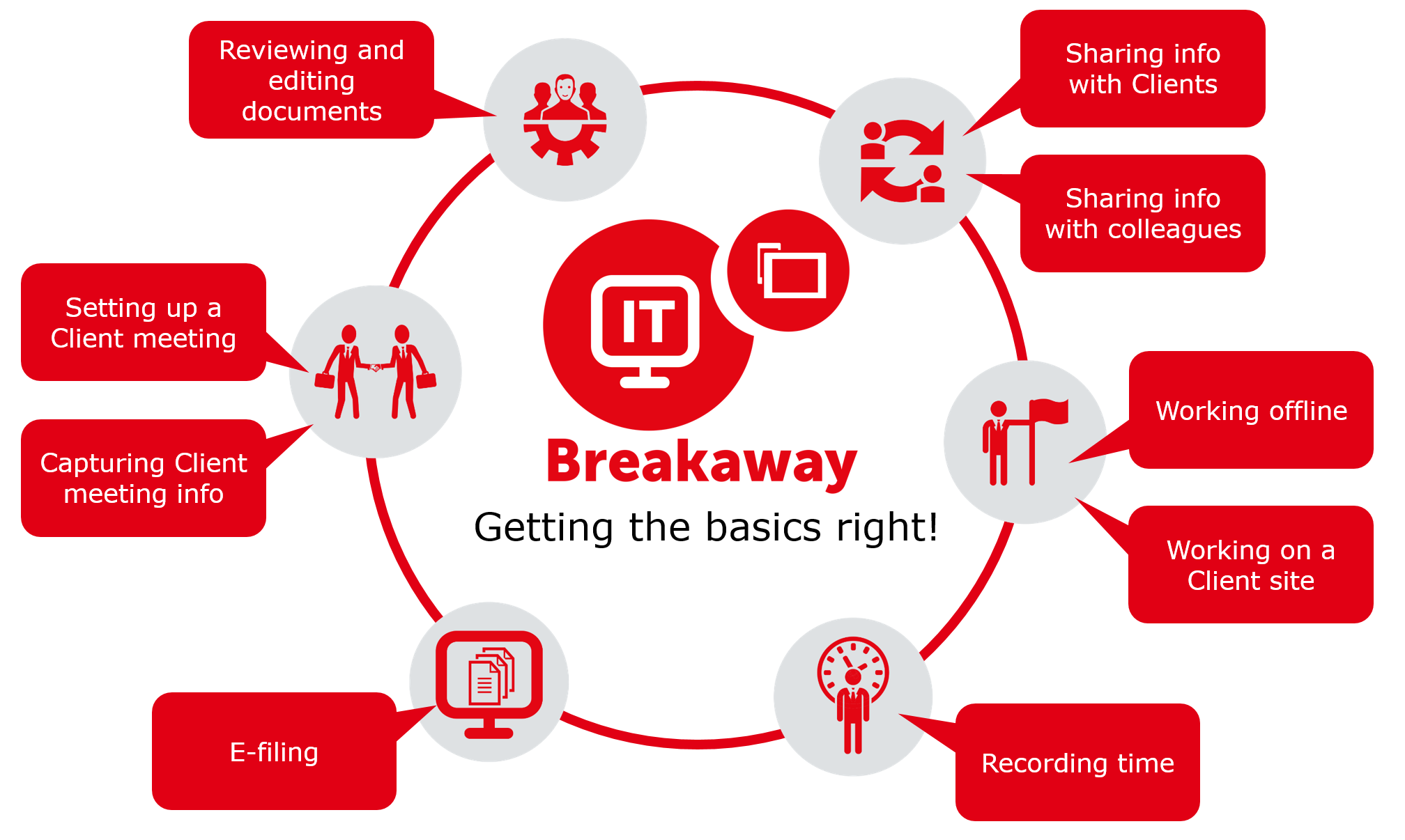 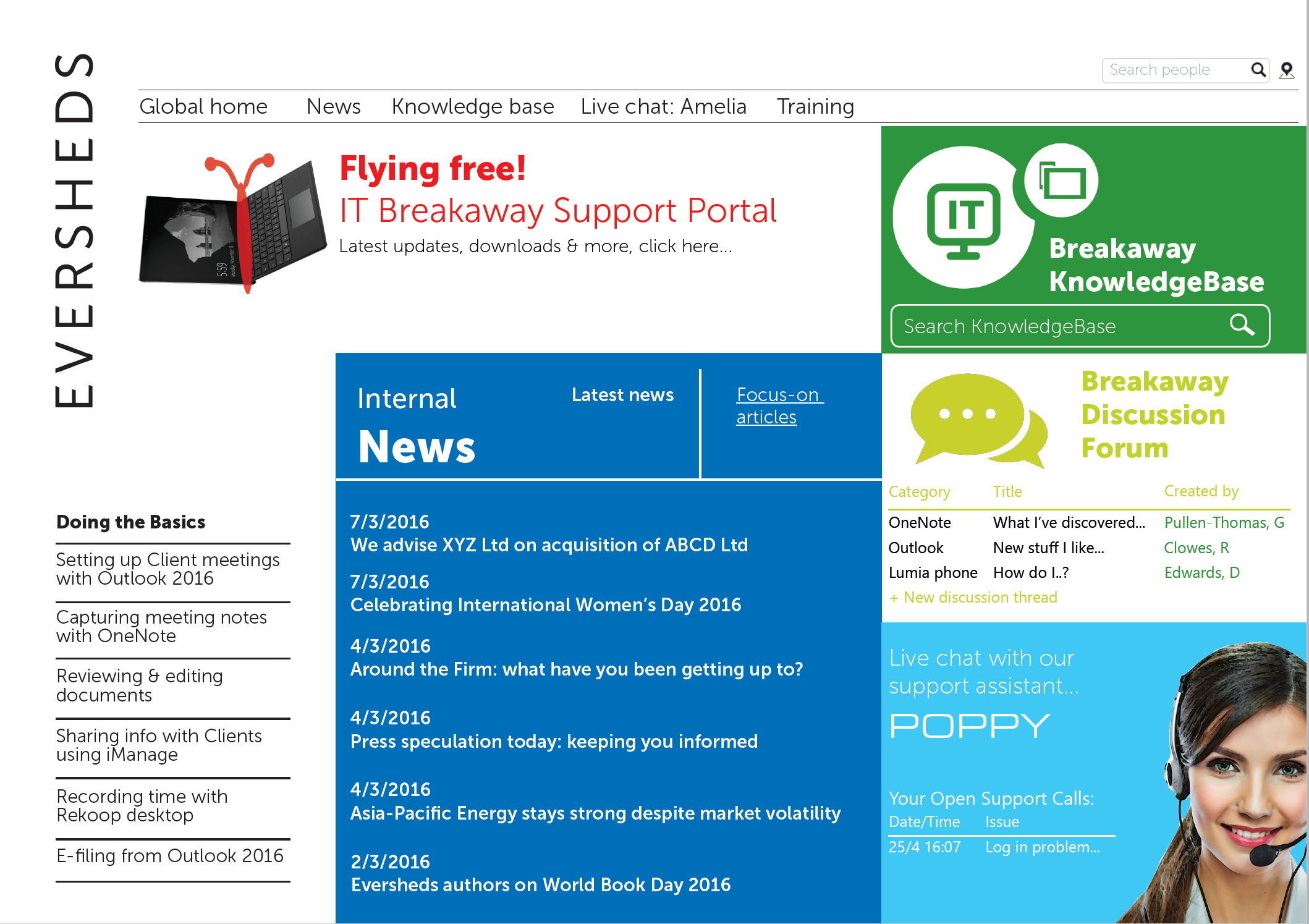 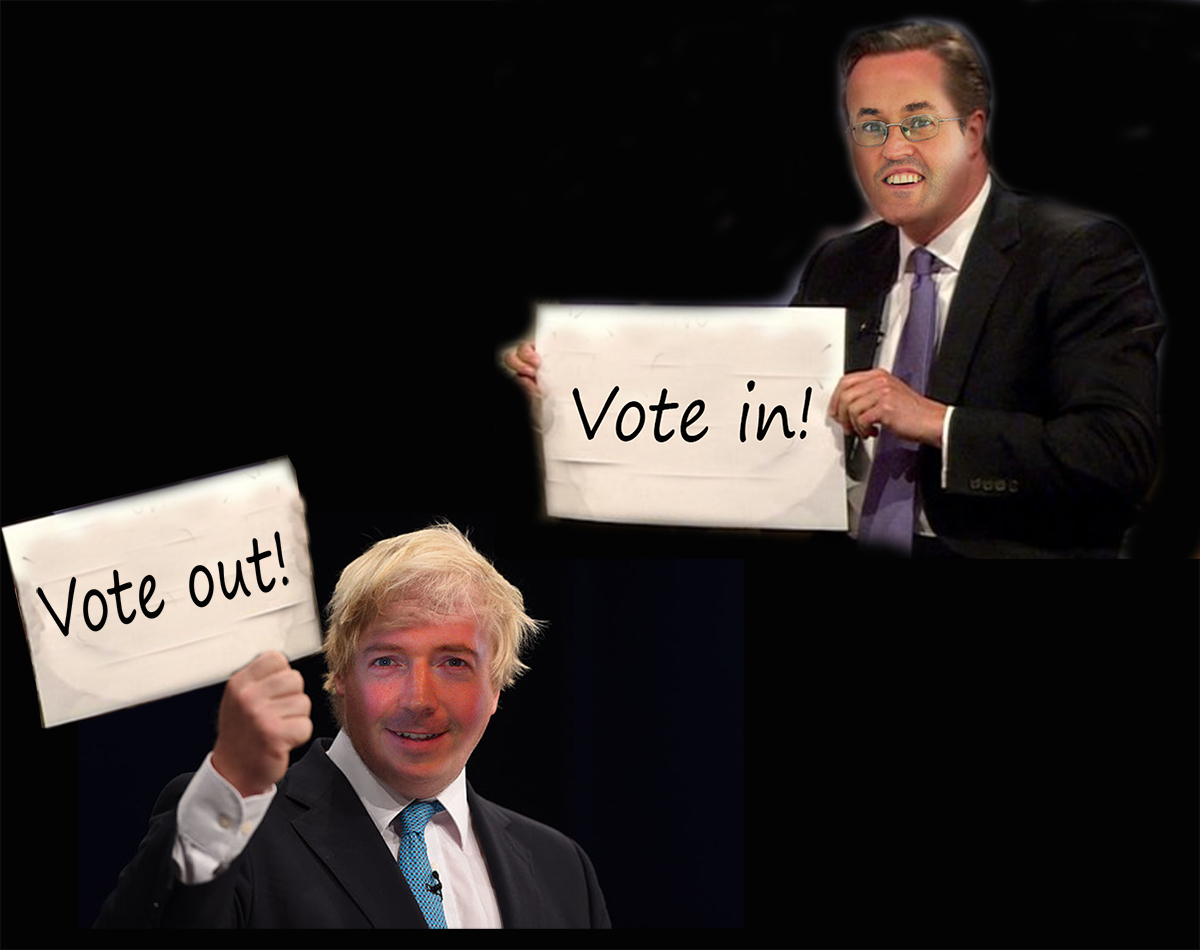 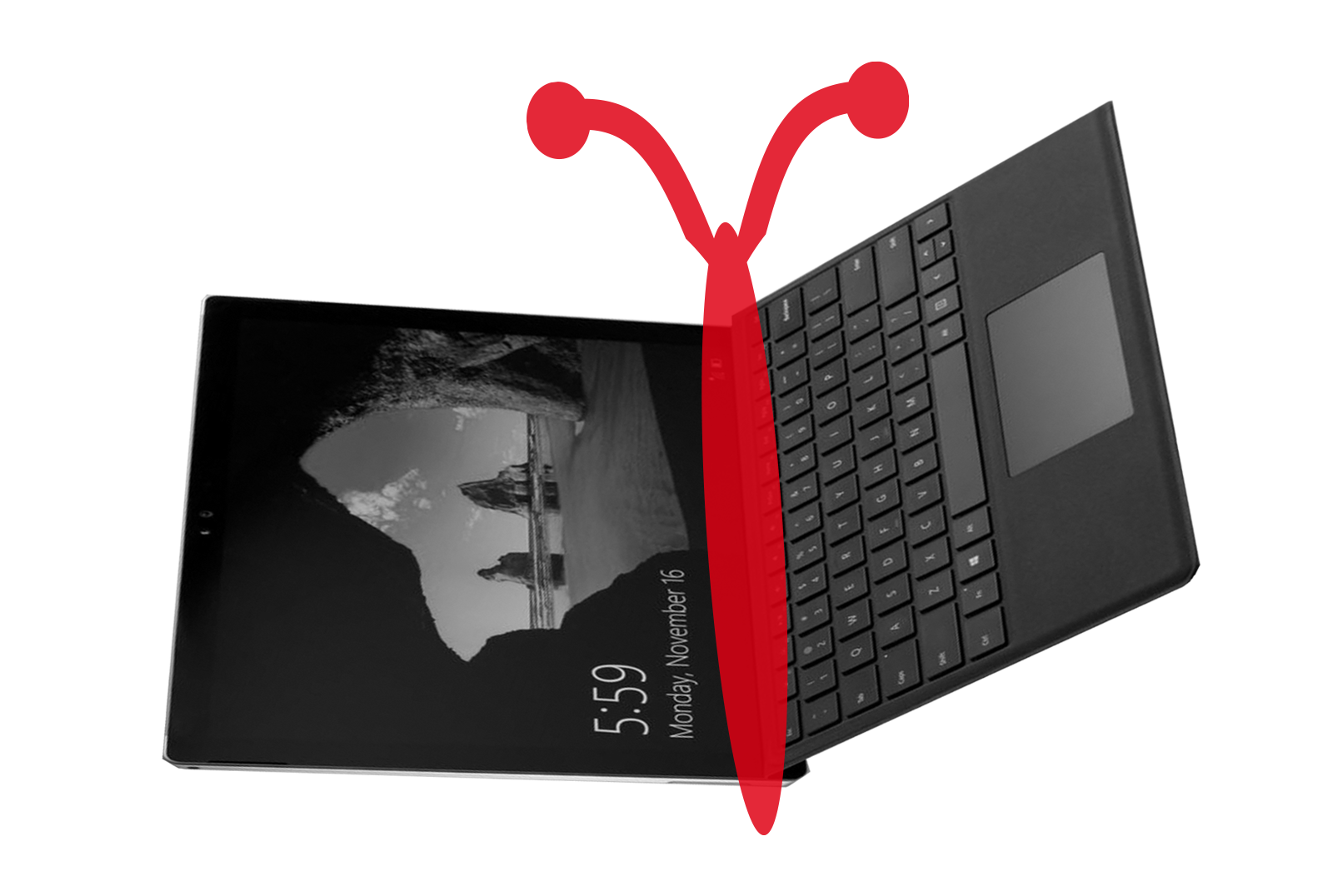 This was project to re-design part of the Eversheds London Office to use the latest office technology.

All kinds of new desks and IT equipment were purchased and the layout was re-designed to help collaboration and productivity. I created both training and promotional materials to “sell” the concept and aid understanding.

When the go-live date approached, staff needed simple guides to help them get started in the new office areas (which were on selected floors). In this first example, (produced using Adobe InDesign), they see a quick guide to the benefits of the “Office of the Future”.

Benefits Guide – “Office of the Future”


In addition to promotional materials, I also needed to create simple guides to the office equipment. The next example is a view of the A3 blotter that was laminated and positioned on each of the new desks.

There was a lot of new kit to learn about. A new room booking system (Evoko Room Manager), a bluetooth conference speaker (Evoko Minto) and a way of sharing a laptop screen to a SmartBoard (ClickShare) were all subjects my training materials. (Click the examples to enlarge) 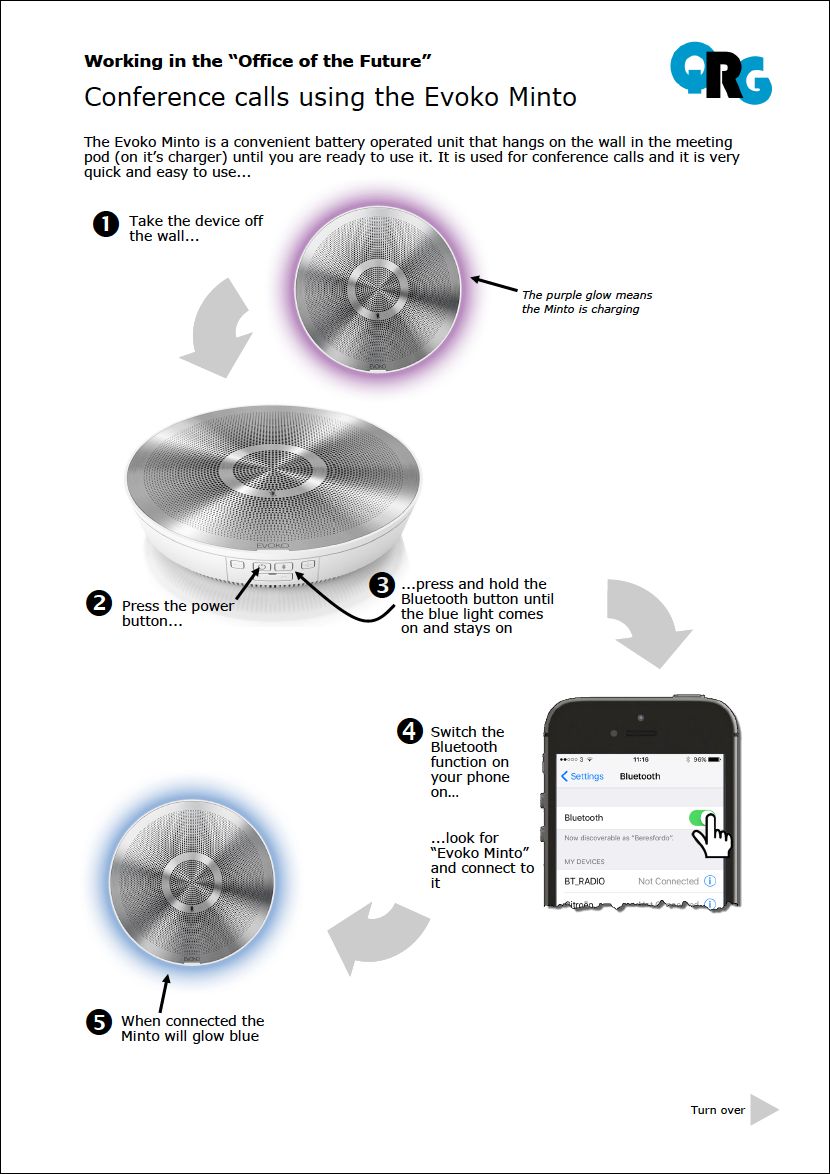 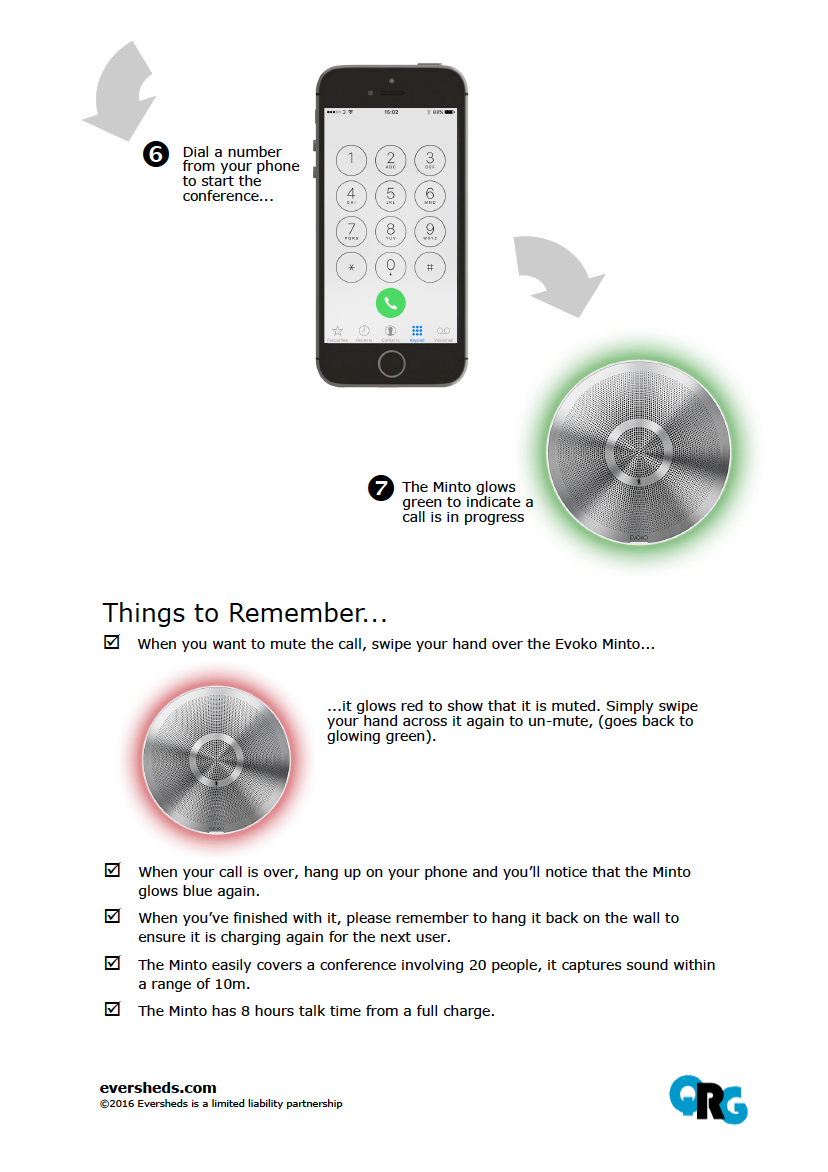 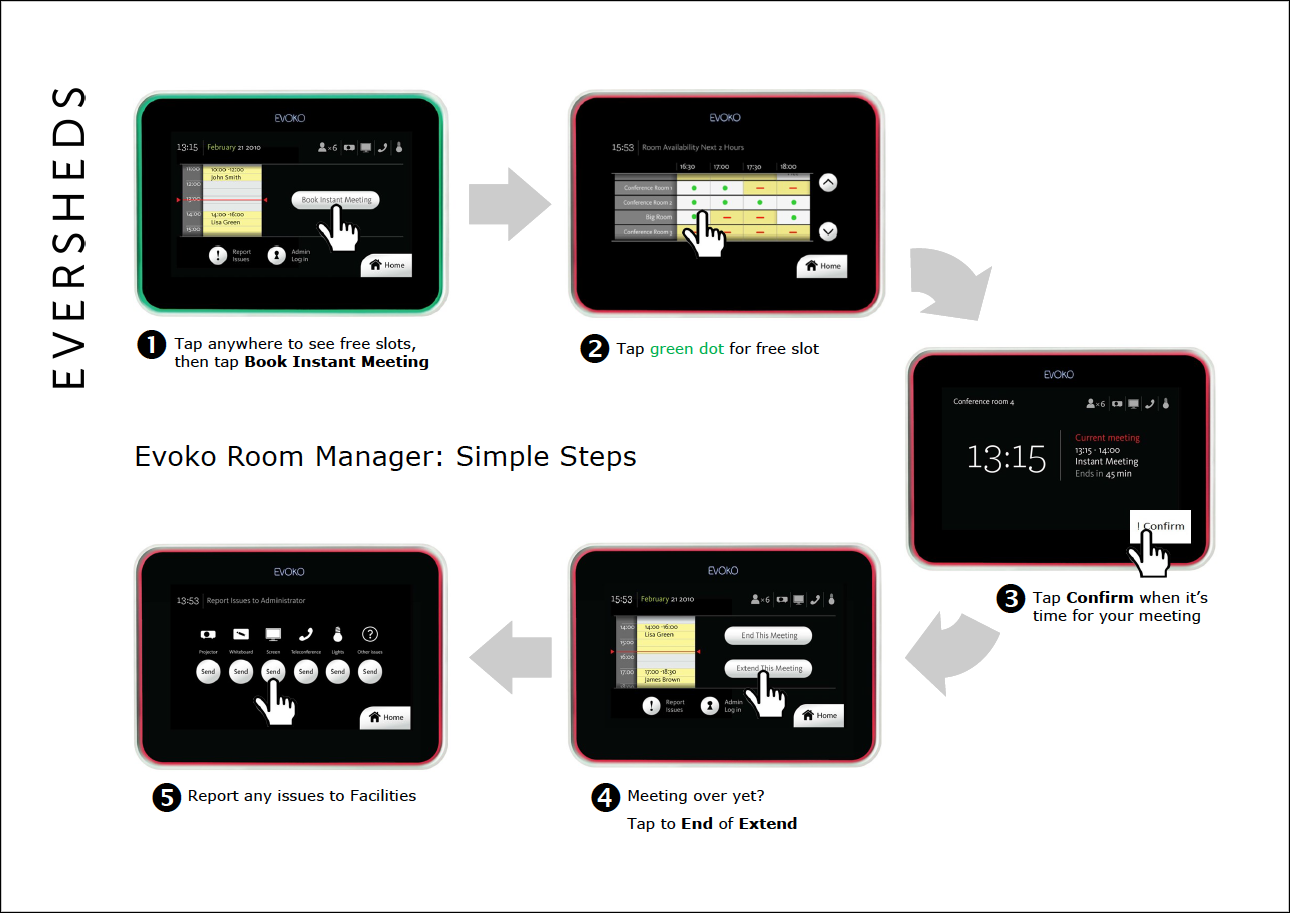 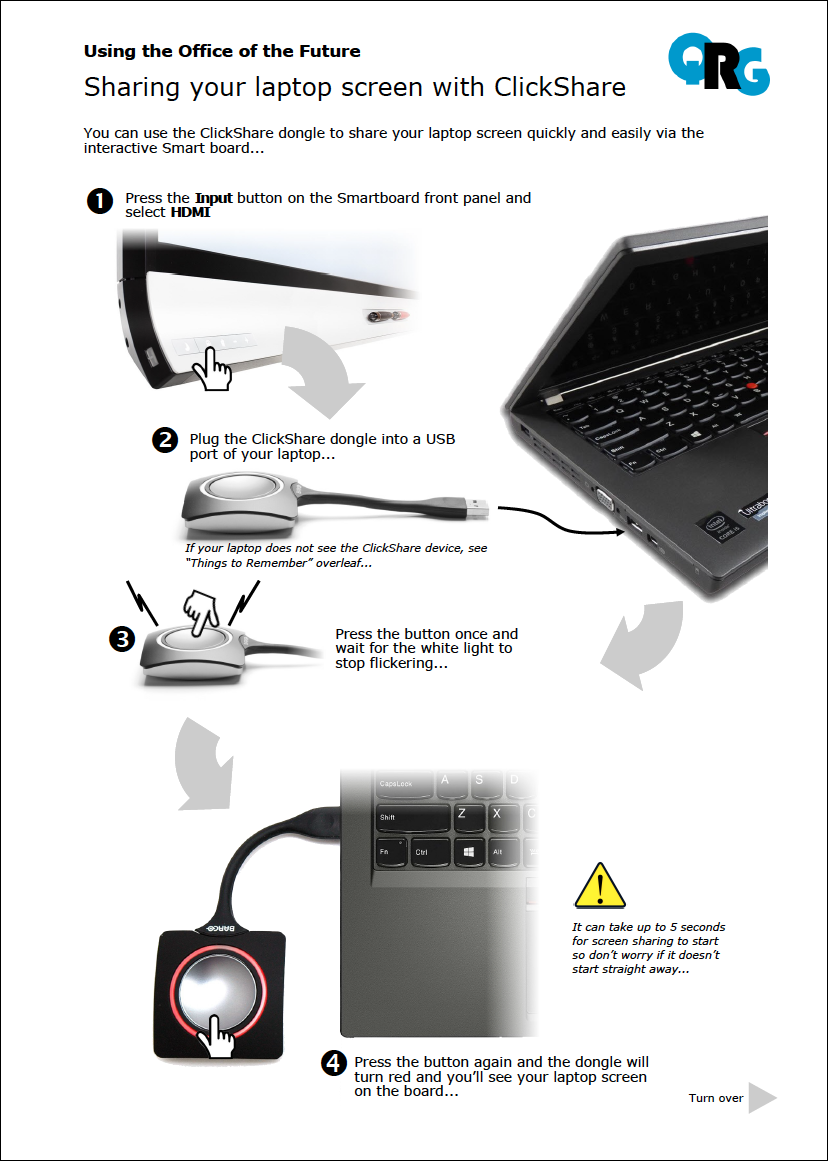 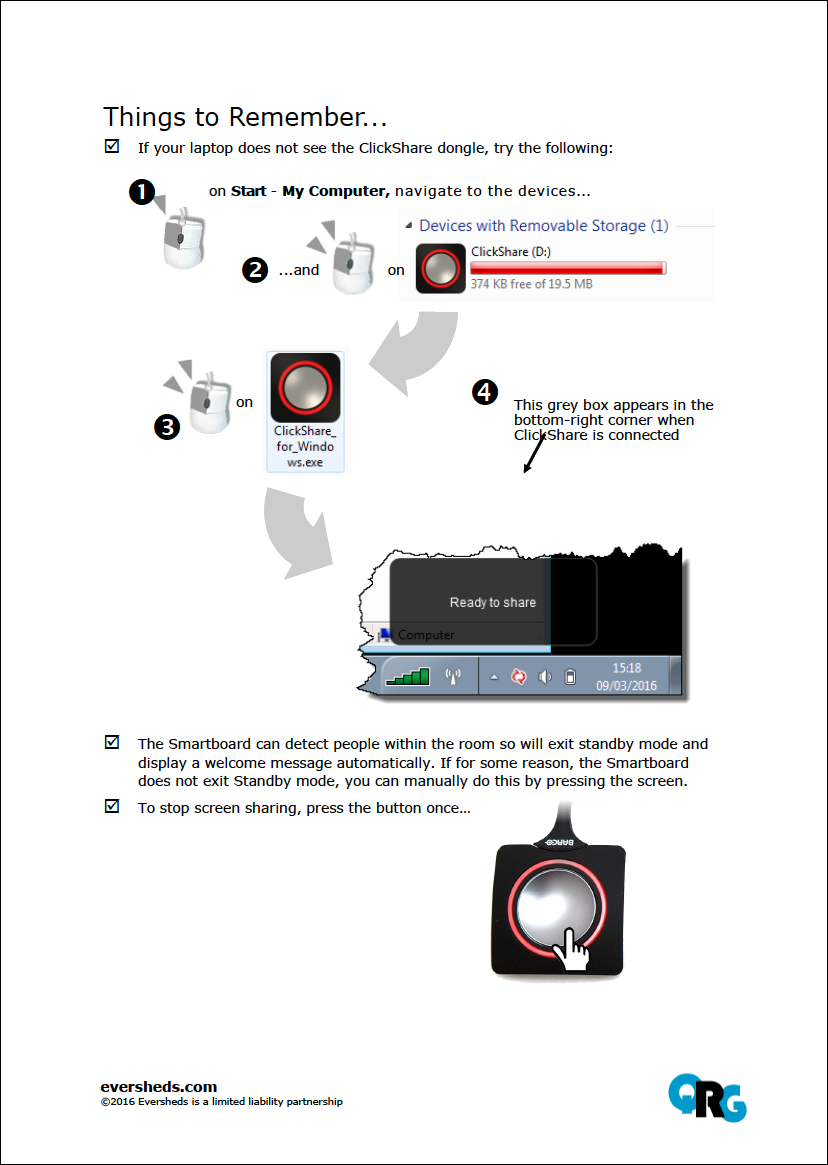 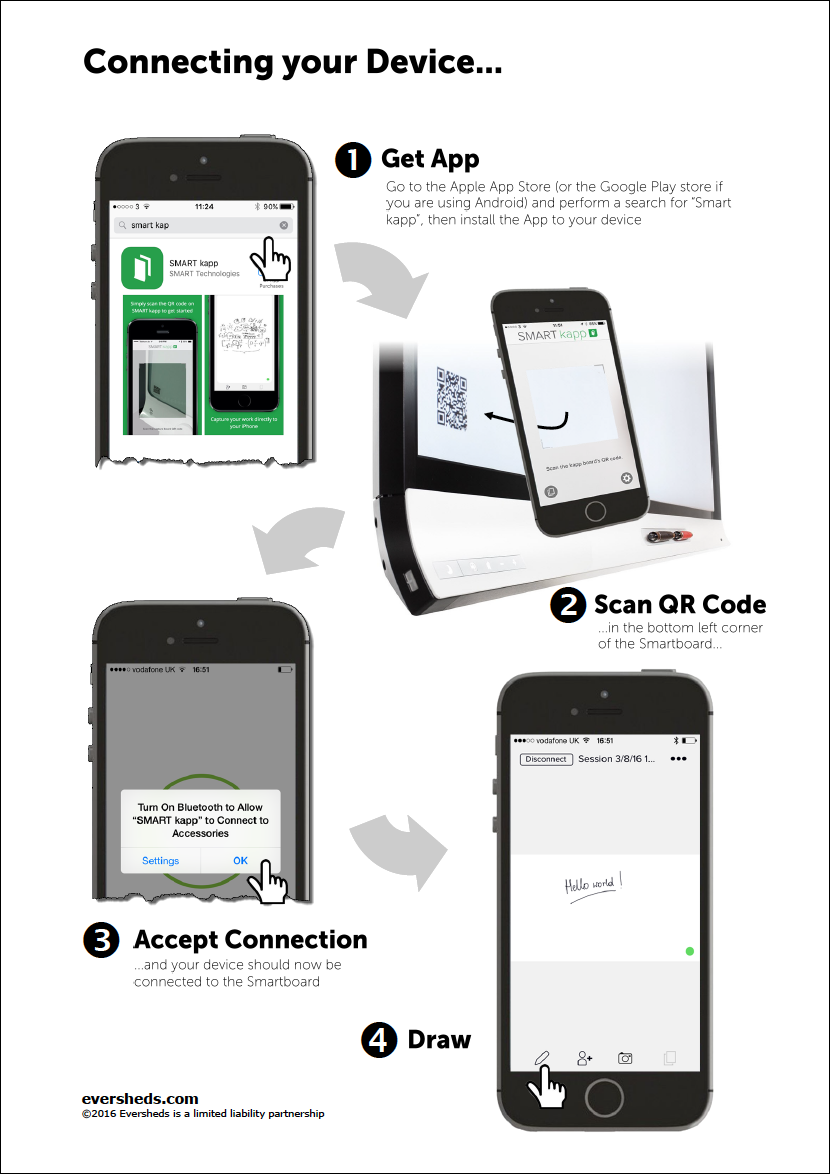 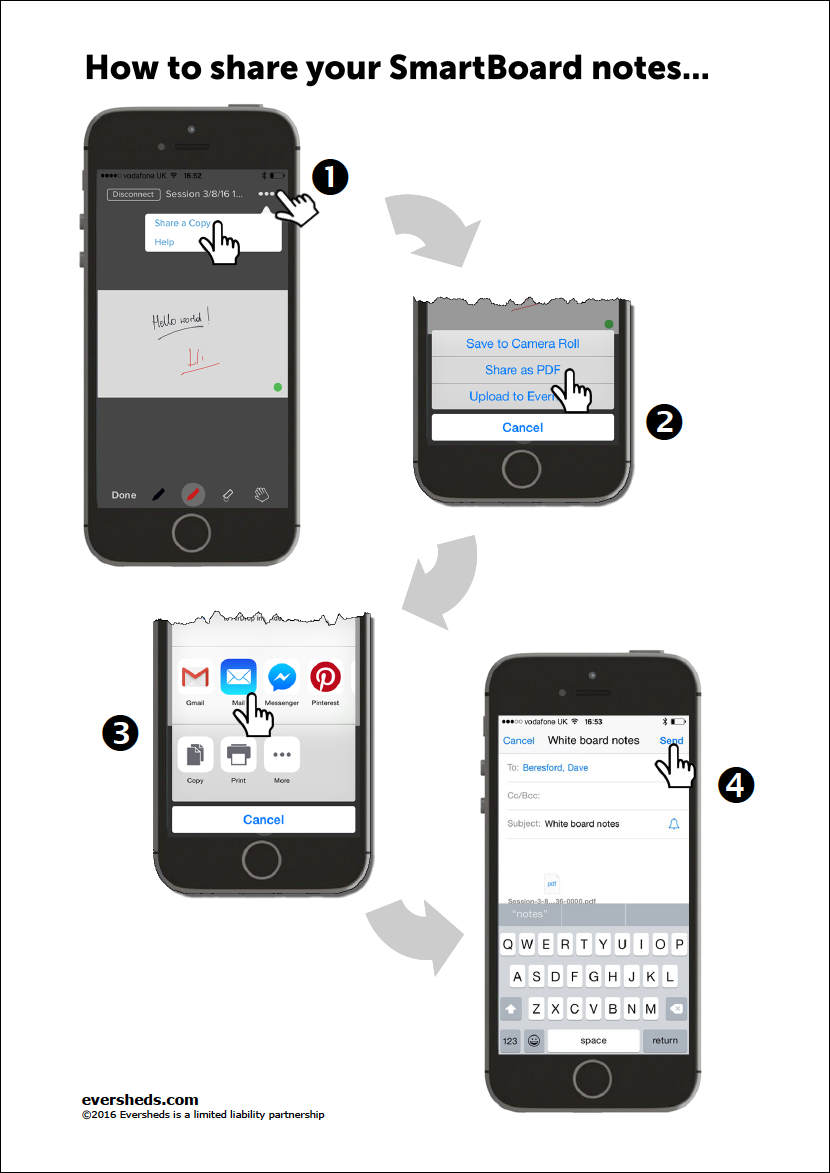 The IT department I was working in ran a conference every year from 2010 that got steadily larger.

In just 5 years, it went from about 60 people in a local hotel to a major international event ran at the NIA. My job each year was to produce the presentation content for whatever theme we were going to adopt. There was a lot of graphical development work, PowerPoint presentations and videos to produce. I would normally work on it alongside my other projects for about 3 months.

I created this robot character using Adobe Photoshop so I could animate him during our end-of-year conference. He was a kind of virtual host for the event, scooting in and out of PowerPoint slides.

My current “Shomi” robot (a key character who features in my “The IT Knowledge” Blog) is a good example of how I sometimes recycle things that I don’t want to bin. You’ll notice he’s had a makeover and had a name change though!

…this is a video of the start of the conference where BEMO “comes alive” and welcomes everyone.

The theme that year was TV – I made a fake TV station and themed the entire day around made-up television programmes. Here is the agenda I used – the picture was a moody shot of our CIO, Paul Caris…

TV Quickie cover and back page 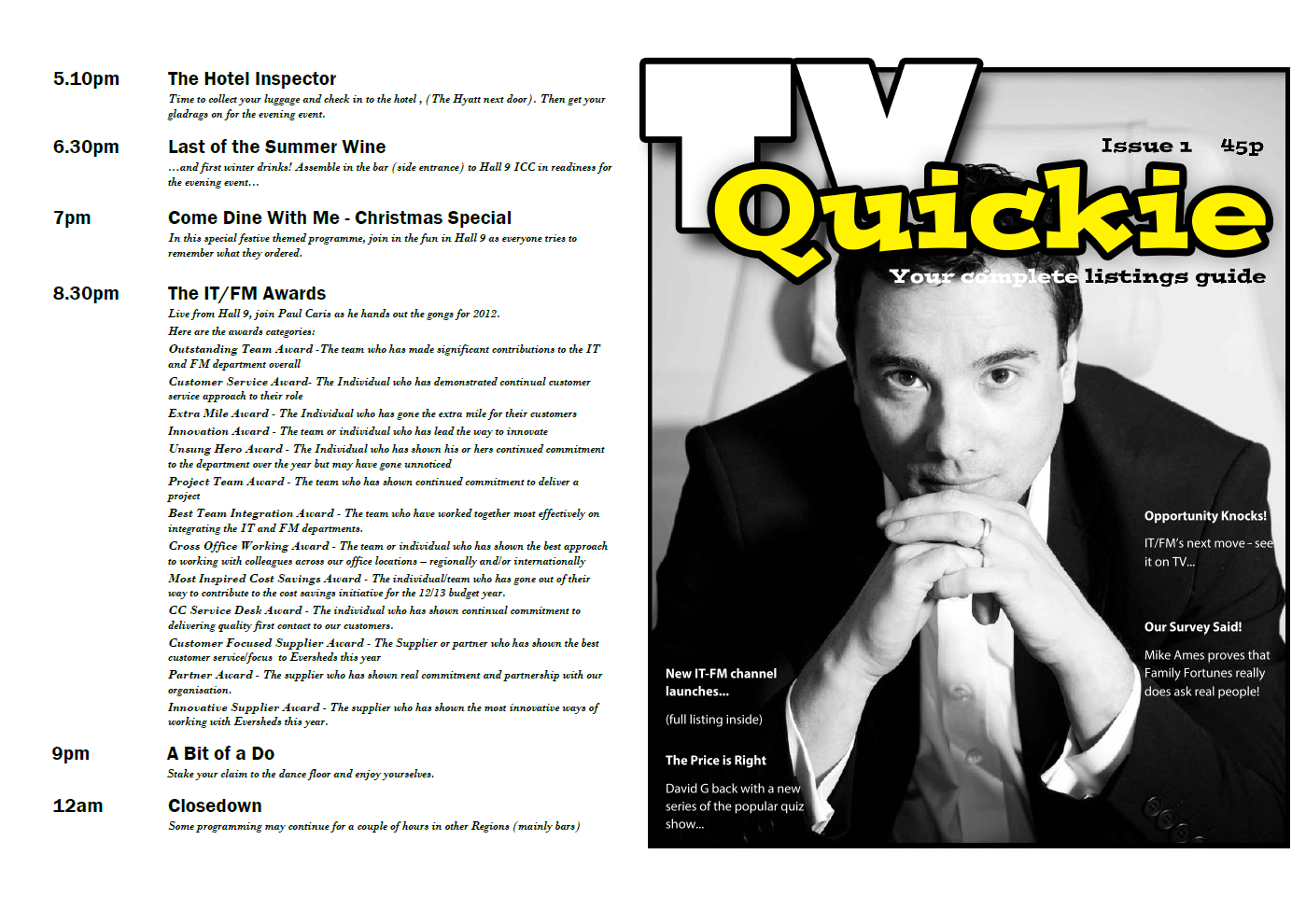 Our theme that year was Nintendo. It basically gave me a great excuse to use my son’s 3DS to produce a series of Mii characters of our Leadership Team…

…and then some of famous people who had a starring role in various parts of the PowerPoint presentations.

I enjoy making Lego Stop Motion videos and they are a great way to illustrate a business topic. I created this video for an internal IT conference in 2010 and I designed it to show IT staff that “little things mean a lot” to customers.

When I create training materials I like to have visuals that help people identify which training programme they are using.