Sometimes other people’s videos can be just a bit boring and too corporate for your audience.

When you need something that’s a bit different, you don’t need to spend a fortune on outside contractors with mega production values or just rip something off from YouTube, (like most people do).

Look no further than your kids collection of Lego! (Or if you don’t have kids, go to the local Toys ‘r’ Us and spend a pleasant afternoon reliving your youth by buying some).

Step 1: What you really need are the figures 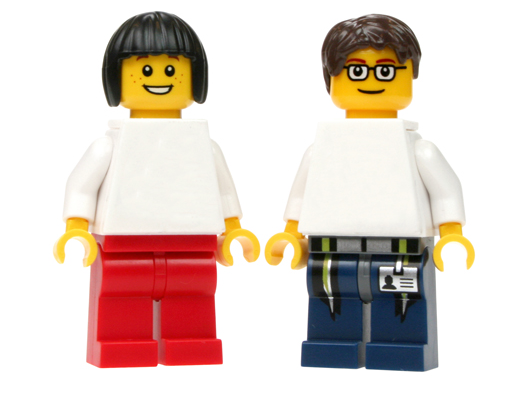 Preferably the standard “City” ones (not Star Wars or Batman etc) as you can easily apply these to a business context. They have interchangeable bodies and heads. Get as many heads as you can because they have different facial expressions that you can use in your video.

Sounds boring, but you really need to make it a coherent situation. Your video doesn’t need to be too long, say 2 minutes max, so keep the situation very simple. Try and illustrate a business principle, like “taking ownership” or “good customer service” and use a scenario that your audience will find appropriate or funny. For example, a reception desk encounter or dialog between 2 familiar managers/employees.

You want your audience to find it engaging and relevant.

You can use more Lego for this of course. You need desks, chairs and flat base boards. Try and use as much Lego as you can, especially phones and computers – it’s funnier if you make it all Lego.

The only non-Lego thing you may need is a white backdrop to prevent your real office making an appearance. I use a few pieces of white card that I place behind my Lego set.

Step 4: Set up your video camera

You’ll need a tripod (probably on the floor set up to point at your Lego set on your desk), and a decent video camera – though you could use a Smart phone if that’s all you have to hand (though you might need to put it in some form of a clamp (for example, a selfie stick firmly wedged into a plant pot).

There are 2 methods I have found that work quite well for this.

Method 1: Shoot it all and edit later

With this method, you keep the camera rolling and film your hands moving the characters heads, arms and legs – then edit out all of that later. Easier and quicker to film, but harder to edit.

This approach suits the confident video editor – my recommendation there is transferring your footage to something like a Mac and using iMovie to take out the offending bits. (Though you can do this on say an iPhone/iPad video editing app)

This suits the Smart Phone user best. You can download many suitable free stop-motion apps on either Android or iOS that enable you to take a still once you’ve adjusted your characters head, arms or legs.

This has the advantage that editing is much simpler and often done completely within the stop motion app. The best 2 stop motion apps I’ve come across on the iOS platform are Stop Motion Studio and Lego Movie Maker.

Here’s an example I made for a conference with a TV theme. I used this as an interlude to the main presentations and effectively made my own version of the famous 70’s Shake and Vac advert. (I found the ad on YouTube and ripped the sound from it with a capture program)

In case you were wondering, the Shake and Vac used was flour, and I added titles using iMovie on a Mac just to give it that advert feel at the end.

As you can see, Lego videos can be cool and make your content really stand out.