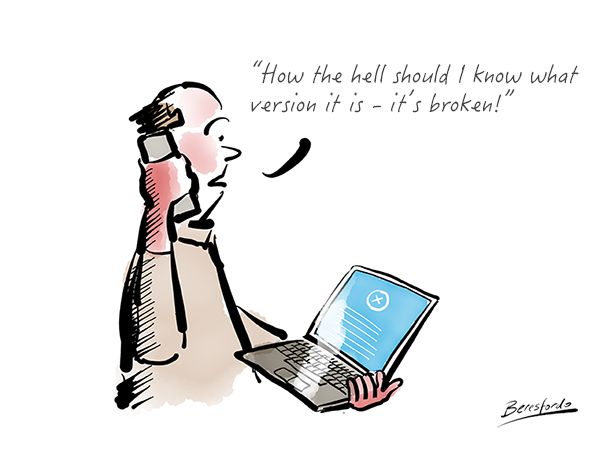 Knowing the version, helps you when you talk to IT…

So many problems we have on our computing devices stems from version of software we have. Whatever that software is – Operating System or Program.

This is the software that drives our device. It makes the device start, it makes programs (or Apps) run and it controls the hardware while ever it’s on.

Some typical operating systems are:

The main reason why the version plays such an important role is that it determines how useful and up-to-date your device is. Some software programs (or Apps on mobile devices) won’t even run on older versions of an OS.

So how do you know what version you have?

This system is one of the hardest to determine version numbers for. Mainly because Microsoft have never had a consistent way to look it up – they just keep changing it from version to version.

Most of the time, people just know from it’s visual appearance – in particular, the look of the Start Menu (in the bottom left corner). Though, in version 8, they famously decided to kill the Start menu altogether until users rebelled and they had to hastily bring it back in version 8.1.

How the Windows Start menu has changed visually…

To be honest, the best way to determine it definitively is to visit the following website on your Windows machine:

I know this feels like cheating but it quickly tells you which version of Windows (and most other systems too) you’re using and saves all the hassle!

If you want to know the history of Windows versions through the years, see this Wikipedia page.

Luckily, Apple have kept this consistent through the years. Have a look at the 2 min video below to find out how simple it really is:

If you want to know the history of iOS versions, have a look at this wikipedia page.

If you want to know the history of MacOS (formerly Mac OSX), have a look at this wikipedia page.